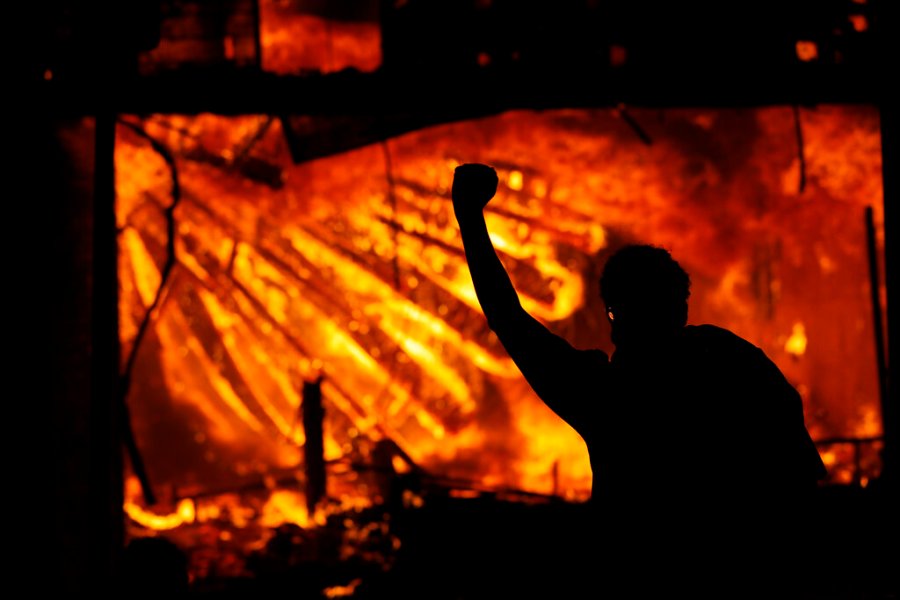 Watching the news on mainstream television is predictable in terms of its trivial or extremist content, simplification of events and often biased perspective. I’m trying to kick the anesthetising habit! In this country and most others, it cannot be otherwise given the type of collective consciousness that prevails and the messages the owners of these media platforms want to disseminate to the largely mute and passive viewers.

One news story reporting this week is the current anarchy in the (dis)United States, the violent but mostly peaceful protests against the police and racist-militarised state, against the murder of an unarmed black men by a badged, uniformed thug. Visual fodder for the masses. Other deaths in custody ignored over the decades. Little balance in reporting, little or no focus on the vast majority of peaceful demonstrations, little interpretation of the systemic failures behind the nation-wide protests and violence.

So I watched the scenes unfold night after night feeling a range of emotions, certainly discombobulated by the violence and brutality, feeling anger at the outrageous murder captured on video. After the threat of our summer bushfires, the floods that ended it and then the corona pandemic and subsequent lockdowns, it was another event of disruption and discomfort. An upwelling of anger at the individual and systemic brutality of the state.

The world is changing, sliding into systemic breakdown. In a world of beginnings and endings, in this uncomfortable space of transition, one of many important questions arise: how can we experience inner peace and stability in this degenerating world? Perhaps a more preliminary question revolves around the idea of resilience, how to fortify one’s capacity to adapt coherently and successfully to the disruptive forces behind the oppressive events we see on our screens. Our vulnerability, our fragility has been underscored by the pandemic and for those directly impacted, the bushfires and riots.

The journey towards resilience firstly requires acknowledging one’s vulnerability and fragility AND capacity to have the courage to live in harmony with these existential aspects of our mortal being. But this journey, which few embark requires being able through self-reflective and critical thinking to take a higher or deeper perspective towards the situation at hand, whether the effects are directly or indirectly felt. One such perspective is to understand that a world of increasing global systemic decline and collapse represents a disruptive transition stage in which outmoded destructive or limiting beliefs and behaviours must give way to more life enhancing, sustaining ways of living in harmony. The question for me and many others is how to best respond to witnessing brutal, unprovoked violence and systemic corruption and breakdown. My thoughts on this in my next blog.